To start out my first blog entry that is suppose to showcase my crappy camera skills, I am going to take you all back quite a long ways. This picture is extra special to me. It is one of the first pictures I took while I tried to execute a scene, a concept that I saw in my mind. It was also taken on my little sister’s birthday. I call this shot Side By Side. I was walking down the Arroyo Trail in Livermore, CA with my now wife but girlfriend at the time. As we walked along the path we came to an odd thicket of trees just sitting out in a clearing. They were quite dense, and my exploring nature kicked in. I just had to see what was inside. I pushed through the brush and came to a small clearing. I was met by two plastic deck chairs. I immediately saw a scene develop in my mind. The subject of course was going to be the chairs. I wanted the viewer to be aware of both chairs but not focus on both. I dropped down to a smaller aperture to blur a large portion of the scene, then I got really close to the backs of one of the chairs causing it to be thrown out of focus. I wanted to use the arm of the out of focus chair as a leading line to the second. Then I forced my camera to focus on the second chair and after just one shot and I knew I had it.
When I got home I put the image into Photoshop. Earlier that week I had read an article on DPS about lomography. It is an effect that a type of Russian camera called a Lomo LC-A made on the prints. The effect was really created by poorly made equipment but it has a certain appeal that people like. I knew I wanted that effect (here is the link if you want to try a lomography effect yourself  http://digital-photography-school.com/how-to-make-digital-photos-look-like-lomo-photography ). This is what I got using that effect. 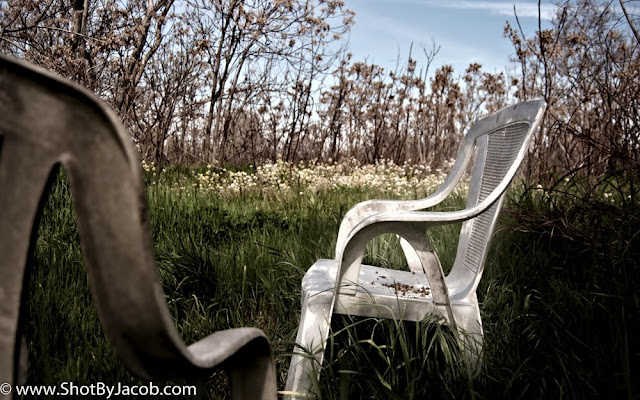 I loved it. It was my best photo to date. I especially liked the odd subject. I have always thought this was one of my best compositions. My wife suggested that I try to edit again. I was reluctant at first but what she said made sense. I have 6 extra years of experience in editing photos. So I got out my Wacom tablet (something I never thought I would end up needing) and went to work. This is my second edit. 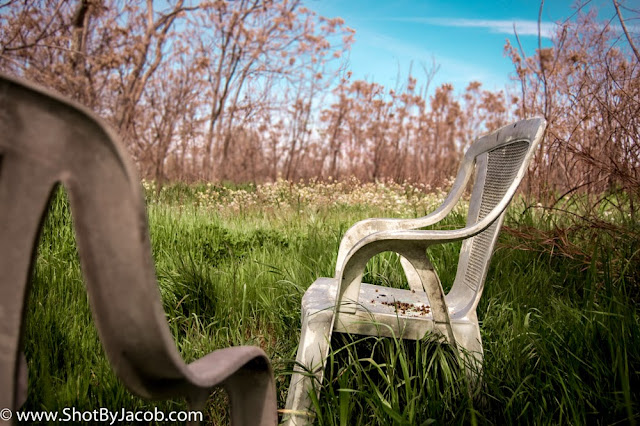 My second attempt is a much more delicate approach. Rather that a broad darkening discoloration while boosting the exposure of my subject, I let the scene be truer to what I captured: the soft orange background with the long grass, the shadow play throughout the image, the leading lines, the beautiful sunny day. This edit has reinvented this image for me. There have to be at least a couple dozen ways of stylizing this photo, but the composition remains the anchoring factor. I executed exactly what I saw in my mind’s eye. This is one of my firsts, and for that it will always be special to me.
Crappy Camera D40 DSLR Education Good Photography Great Photos Jacob Macias Lawn Chairs Lomography Nikon photographs photography Regardless ShotByJacob