The next morning we were greeted by sounds of seagulls and crashing waves . Opening our balcony doors let the salty smell of the water in, the typical cool ocean breeze wafted into our room. I for one was ready to see and do more. After a quick breakfast we got on our bikes and rode north on an old logging trail right outside our hotel. There was a small beach head near the road sandwiched between cliffs. We went to the beach first because I saw an interesting scene of rocks. After taking the photos on the beach we headed up the cliffs. I immediately saw another great scene that would look great as a panoramic shot. Its a scene of chaos and calm, crashing waves and a tranquil tide pool. The harmonious contrast was a unique shot with the early morning color cast. I was happy I was there at the time of day I was to catch that.

Speaking of tide pools I came across another one. I had to stand on some rocks keeping one eye on the incoming waves and the other on my developing scene. I liked the colors and mood of this scene. The cool blue of the clear water, the plants waving back and fourth in the current and the orange/brown floating debris. I just think that it all works together to have an abstract colorful moody photo. I think it may be a tad busy and selective focus might improve the entire shot, but this is a mood photo utilizing the interaction between the colors. 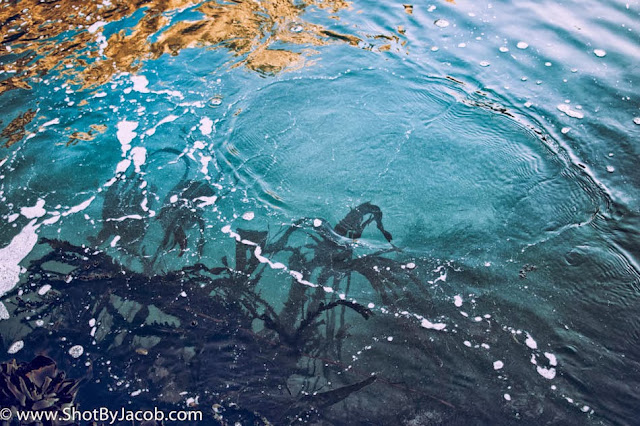 Further up the logging trail we found more interesting ocean scenes The coastal landscape that was there was quite impressive, the blue skies with the black ocean boulders and foamy waves lent so nicely to so many scenes. It was hard to choose which shots I would display. This scene was begging me to take it in HDR (high dynamic range) format so I set up my tripod and did a manual bracketed shot of 4 exposures. Clouds are always so dramatic in HDR compositions and I was thrilled to have them in my shot. I thought it would add all the more to my shot. To accomplish this look I used my HDR composition to boost the shadows in the fence, lighten the foreground, and bring some details back into the clouds before I blew them out again with a graduate exposure compensation to help give balance and mystique. 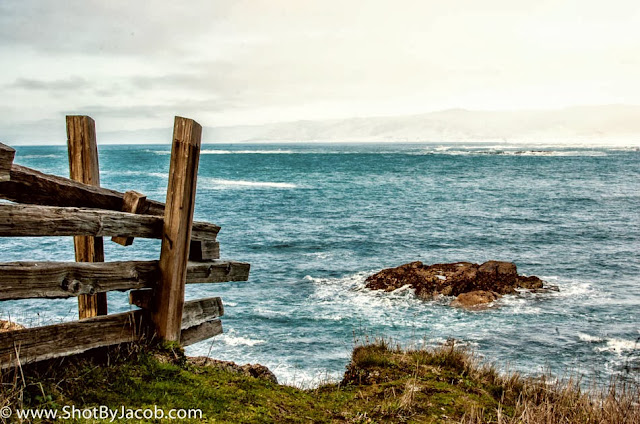 By this time we were both a little hungry and decided to head into town to get a bite to eat. We didn’t want to waste any of our time indoors so we got a couple sandwiches at the Safeway deli and headed to the botanical gardens. We found a nice bench out of the way from the main path so we set up camp to eat. It was incredibly peaceful, it relaxes me just thinking about it. Even though we could not see the ocean from where we were we could feel the breeze, smell the air, and hear the waves, it was perfect. We finished our lunch and went out to enjoy more of the gardens. Walking through the maze of paths and soaking the splendor of the garden was enough for us and more than what we had expected, but the further we walked the more we anticipated seeing the ocean, we could hear the ocean sounds growing louder as we continued on. Rather abruptly we walked into a clearing with spectacular views of the coast. 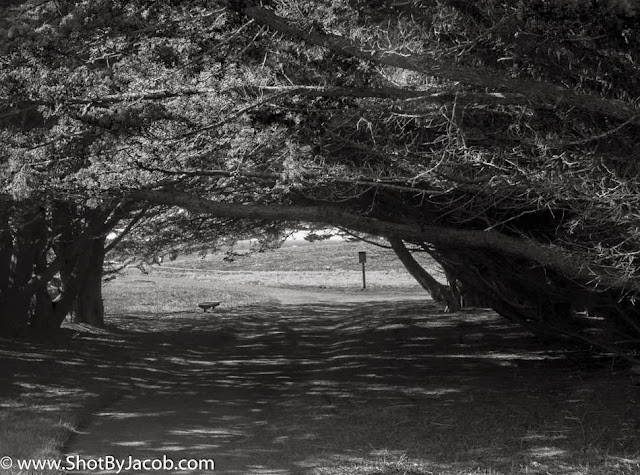 The high cliffs that that plummeted into the ocean was a beautiful scene. I setup my tripod and got to work. My first shot was of this path that seemed that it would continue down to the surf but it was deceiving because one step to far would lead you to your death. I composed it with the path leading your through the frame and ending around the classical 1/3 frame composition. 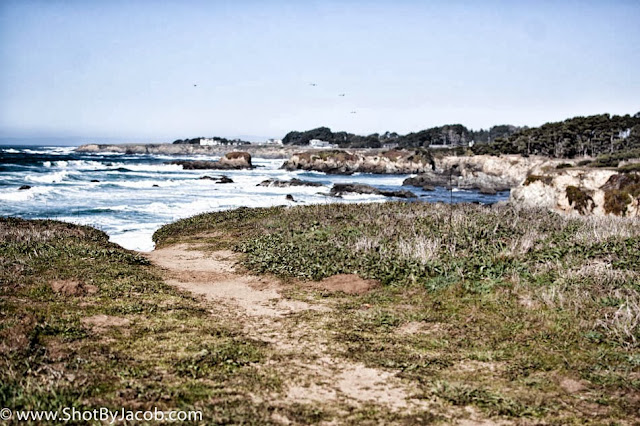 Two more shots I found at the botanical garden. 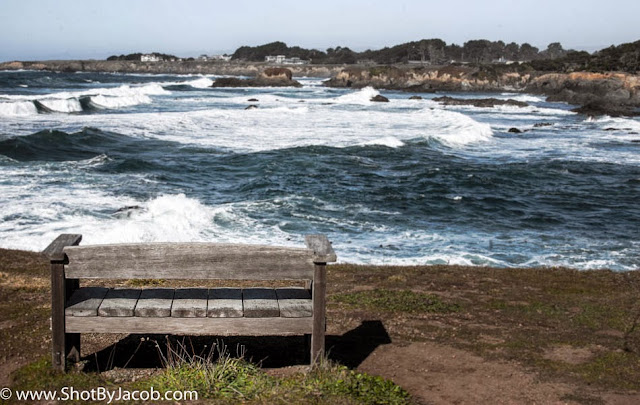 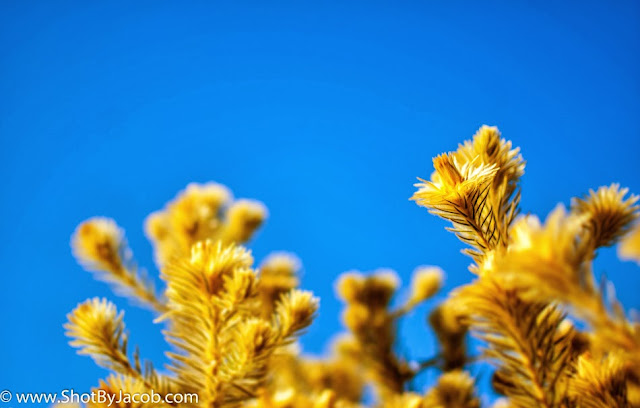 Once we had thoroughly explored the garden we headed back north to do some sunset/evening shots on the coast. I had seen a place that would work for those types of shot earlier when we were on our bike ride and I was anxious to return. This shot was from down on a tiny beach head that was between the cliffs. I did the best I could without the use of a graduated filter. I took several bracketed shots in hopes to combine them later. This is one of those shots. 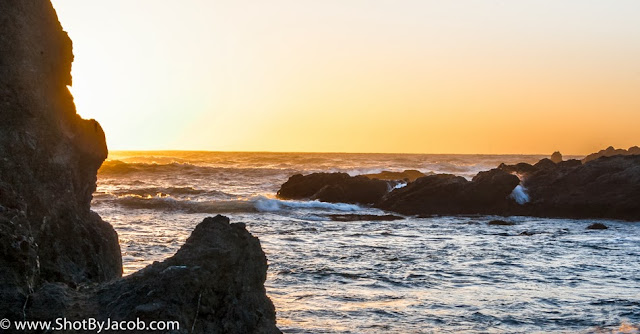 After shooting a successful sunset shot I felt that I had done what I came to do. So up the path to the top of the cliff we went. I remember an old photography saying, “you can only shoot what you can see, so always be looking up, down and behind you.” I turned around to see Fort Bragg getting ready for the night. I knew I wanted to smooth out the water and get good focus from front to back on this shot so I mounted up my tripod and dropped my aperture down to f/18 and 30 second exposure. There is no way I could have made this shot without my trusty tripod. For the last shot of the day I couldn’t have been more thrilled with the photos I got. I was ready for some wine, our deck, a large pizza and my best friend. Back to the hotel we went. 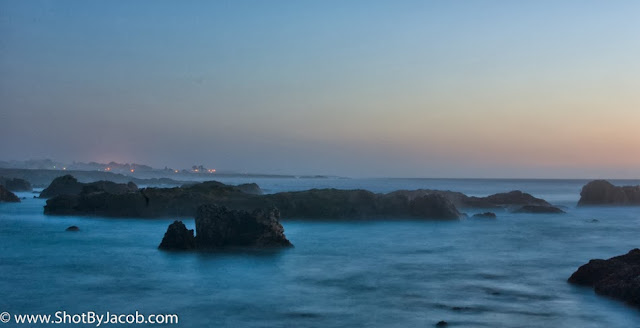