What I saw in New York City

My wife and I took our first trip to The Big Apple on the 10th anniversary of the World Trade center tragedy. We were a bit nervous being there because of the significance of a decade of remembering the fallen could have spawned another attack. We flew out there nonetheless Sept 9th, 2011 we had high expectations of the acclaimed metropolis. We were very excited as this was our first trip to the east coast together and what better way to make a splash with that than with one of the greatest cities on earth. We flew out of San Francisco at just after 7 a.m. We were greeted with a promising day when we broke out of the clouds. 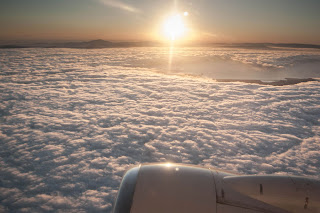 The thick layer of clouds that always seems to envelop the Bay Area suddenly reached their maximum point and the sun shone brightly. I briefly thought of the amazing foggy photos I could be taking on the ground, and then wondered what New York would have to offer. We landed safe and sound at Newark and then took a 16 mile, 80$ cab ride up the Jersey Turnpike, through the Lincoln tunnel and into Midtown to our hotel. The warm steamy afternoon was filled with energy as we took our first steps in Manhattan. It was exciting and our eyes filled with awe at just how large the city really was. We got into our room which had a partial view of the empire state building but where in Manhattan could you go and not see the iconic structure towering above you? We got ready for our big night out and I felt that we looked the part. We were headed to Fashions Night Out on Fifth Ave. We took 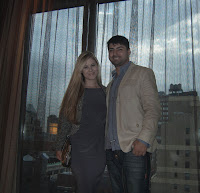 what we thought was a short stroll, in reality it turned out to be a long walk, but we were still pouring with energy from the city and there was plenty to see along the way. We stayed out for hours browsing the shops on Fifth, and being spectators of the show the city was putting on for this event. The city that never sleeps is such an appropriate moniker as I can attest that well after midnight, the city, although cooler, was still lit up like it was early evening and people were everywhere. The large assembly of bodies that were coming and going in all directions forced me to stay alert and quick on my feet to avoid colliding into people crossing my path. We were tired, but hunger was in charge. The bombardment of places still open to dine was mind boggling, we knew we wanted something fast and good so why not a slice of would famous New York pizza? Problem one done, what we want to eat, problem two proved much harder. Which pizza shop do we choose? We walked by several before we decided on Famous Famiglia. We each got two slices and some cheese bread. I bit into it and rolled my eyes, there is no way pizza at 2am should be that good. I got one more slice within minutes. I felt like I owed them a lot more than 2 bucks a slice but chalked my win up to the idea that it was our first timers rate, the first hit is always cheaper, they knew I would be back. We walked back to our hotel, stuffed and achy from the blocks of ground we covered. Sleep hit me as I sank into my pillow and we were out till the sun woke us up the next morning. We sat in our swank robes with tiger stripes on the lapel and cuffs feeling more like true New Yorkers after eating pizza and walking down Fifth Ave. Looking outside my window I became enamored with the endless rooftops. Almost every one of them had a water tower posted atop, some had several. I took a few shots from our room. I wanted to capture the raw grit of the distressed and decaying wood and the discolored metal roofs of the water towers. The brick on the surrounding buildings only lent to the age of the scene. The purple cast aids to the “found in the attic” feel. I finished up my shots and then decided to get ready for another day in the vastness of concrete and commerce. 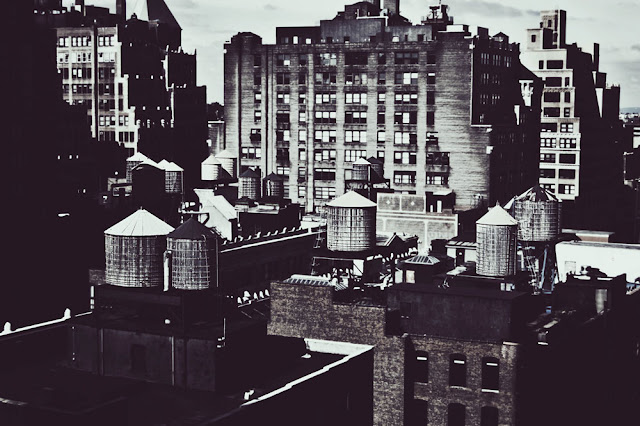 After a wonderful breakfast in more typical fashion at Lavo Italian Restaurant, with wait staff and menus we were a mere 2 blocks from the acclaimed Central Park. So we headed to the entrances on the south side of the park. It felt like the entire city’s population was inside that park jogging, or walking, or just hanging out. It’s a good thing it is 51 blocks long because it needed it. There was music coming from everywhere, not from speakers, but live performances of people trying to make a buck. I was drawn to one sound in particular, a hollow sounding trumpet, after looking around for the source I found my subject under a bridge and I knew I had to take a picture of his silhouette. What I needed to make this photo successful was a separation of the man’s dark figure from the lighter background. He was in complete darkness, and although I could have adjusted my exposure and taken two separate shots, one for the darker foreground and one for the light background and then merged the two photos later, I decided that the mystery of the trumpet player added to the emptiness of the tunnel. His ambiguity made it a more romantic tone. In all essence the trumpet player was there to beg, something most of society hastens by without feeling the demand to aid, and because of this lower status is yet to be welcomed, so instead stands at the fringe waiting for his steps into a new life. 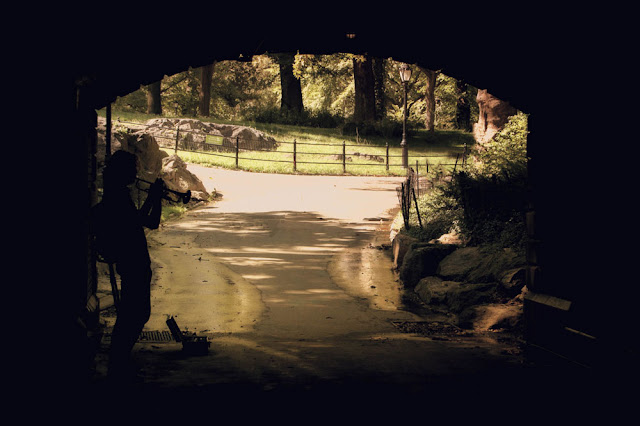 Continuing our walk around the park without a map and knowing I might need the juice on my phone later for valuable direction, we had decided that heading south and exiting would be prudent. On the way out we saw many horse drawn carriages hauling happy customers, no doubt tourists with all the shutter clicks I heard. I felt like I was in good company. We reached a bluff of rock with a perfect skyline backdrop. We were not the only ones shooting there so I had to be patient. As I stood there observing the scene I could not help but notice the feeling that city buildings were growing right out of the park. The massive park with its expansive trees seemed to fade away as the colossal buildings stole the stage. I particularly liked the composition and felt it a well executed deliberation on my part to have a light to dark to light balance in my photo, with the growing buildings there to add to the focus skyward. It was a majestic scene. I put it in black and white to be able to see the tonal range easier. 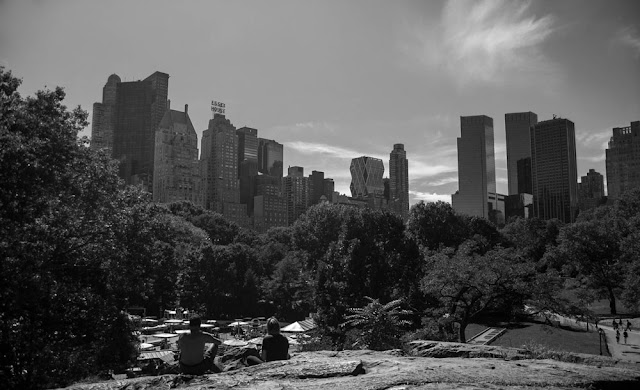 Fully exiting the park and heading back into the throngs of street walkers and taxis meant we were off to our next destination. The illustrious Times Square, renamed from Longacre Square when the New York Times moved into Times Building in the early years of the 20th Century. Our walk took us by another great landmark of our nation. 30 Rockefeller Plaza. Homes of NBC Studios and Radio City Music Hall, the larger than life tower was impressive to say the least. Walking on we crossed into the square which was utterly plastered with ads, and for good reason, more people visit and pass through Times Square than any other place on earth, an estimated 500,000 people pass through the square daily. Maybe someday I will have a photo there to catch a portion of those eye balls. We got to the subway and immediately realized that the trusty Bart transportation I ride in San Francisco most certainly did not help train me for this maze of trains. We were headed to Brooklyn and we were told to take the F train. Down into the belly of the metal beast we went, further and further and further down 5 stories at least below ground level we find our train coming. The appeal of the scene immediately spoke to me and fired off a few shots before the train departed. The importance of the shot to me was to reflect the industrial, raw and exposed nature of this deep, man-made tunnel. The lonely work of the overlooked train sat there silently loading and unloading passengers. 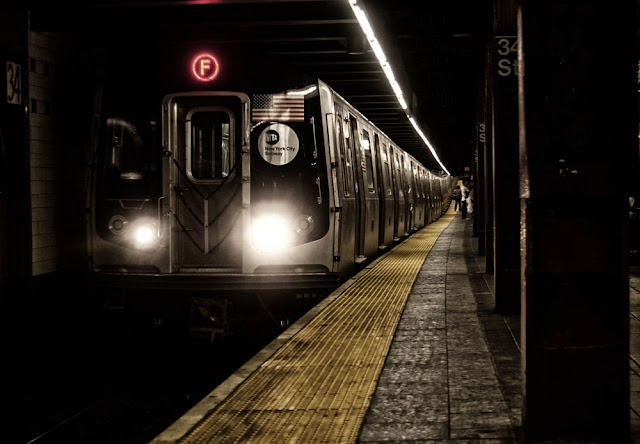 Our arrival to Brooklyn was quick, even with the many stops along the way. We walked along the promenade with a glimpse of the Statue of Liberty to the south and knew this was exactly how we wanted to end our evening. We stayed for hours watching the changing colors of the sky into an orange hue from sunset and then into darkness. The skyline to the west was begging me the entire time to be shot in panoramic fashion and I finally obliged. I came out with one my most favorite photographs I have taken. It is a photo of the most southern point of Manhattan, it has one of the freedom towers under construction, the Brooklyn bridge and just a wonderful symbiotic flow. The light being cast from the buildings into the sky in the top left and then to the darkness in the top right to the light cast by the bridge in the bottom right to darkness in the lower left. I love the movement of the photo created by a natural approach to read left to right, starting at the buildings going right to the bridge shooting from center frame then leading you to the outer edge of the frame and then drawing your eye across the bottom through the light and back to start again. The balance was very successful and I am very proud of it.

Our next day was our departure date. We went to a deli and got some breakfast and then headed out. I snapped a quick photo of the skyline as our cab drove us away from the city. It was a spectacular experience and I feel like I owe all the people that have passed through that city a huge thank you. Thank you for leaving your mark and making it what it is. I cannot wait to visit again.
Brooklyn Bridge Central Park Flying Grungy Jacob Macias Lomography Manhattan New York City New York Skyling ShotByJacob Subway Trumpeter